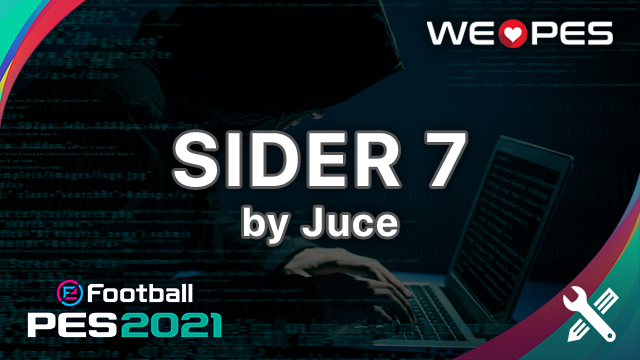 Sider7 is a companion program for PES 2021 and PES 2021 Lite. It allows for small tweaks - such as "free side-select" (which is where sider gets its name from), and time expander for the demo version. It also facilitates game mods, created by the modding community. The two main features are LiveCPK and the scripting engine, where you can write your own mods in Lua programming language.
LiveCPK makes it possible to replace game content at run-time with content from files stored on disk, instead of having to pack everything into CPK-archives. (This feature is similar to Kitserver's AFS2FS and to FileLoader for earler versions of PES). Depending on how and when exactly the game reads the replaced files, you can even live-edit some things, like textures or 3D models, without exiting the game.
If you know a little bit how to program, you can write your own game logic using Sider's scripting engine. This requires some reading and understanding of how the game works, but it's really not that hard ;-) See scripting.html - for detailed documentation on that.
TUTORIAL for PES 2021 CPY
DOWNLOAD HERE - DESCARGAR AQUÍ
SIDER v7.0.2 (by Juce)
=======================
SIDER 7 ~ Release History
=======================
October 6, 2020
v7.0.2
- another fix for "match.minutes": now works with 1.01.00 and 1.01.01 game exes
September 27, 2020
v7.0.1
- fix for "match.minutes" option in sider.ini. It works again now.
- corrections for "cr7_audio.lua" module (Ronaldo SUUU sound demo)
September 15, 2020
v7.0.0
- initial release. Most things seem to work