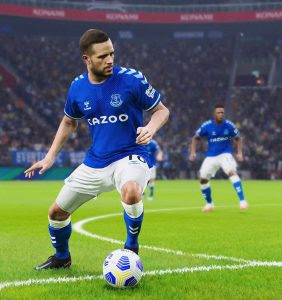 What it’s new in 3.5: ball physics should be improved, as well as the CPU being less overpowering in the tackle and in the penalty area. Also made a couple of adjustments to make the CPU build up through short passes a bit better, though they still attempt too many long balls; the AI can be a little passive at times.
The version 2 of PES 2021 Gameplay Mod Version 2 by Lewpop adds a few of the more ‘experimental’ tweaks to this one, so let me know how you get on guys…
Main Changes:
Increased defensive line height/retreat depth
Slight tweak to the min/max height of defensive line compressed the distance between defense and midfield. I haven’t gone too crazy here for the moment, these tweaks actually random knock-on effects on things such as dribbling.
Small tweaks to ball physics
Just made a couple of tweaks to slow down the ball slightly. This was to combat the amount of gameplay variation the game has between sessions.
Further slowed down AI buildup
Made a couple of adjustments to make the AI more likely to pass in to midfield as opposed to directly to the striker. However this is heavily influenced by tactics (for both teams), so teams may still be super direct depending on who and how you play.
DOWNLOAD
Additionally, you can also use 3.5 + The PES 2021 Gameplay Mod by Holland
(combination tested by many with excellent reviews!)
Drag the file called ‘dt18_all.cpk’ in to your PES 2021 ‘Data’ folder (Steam\steamapps\common\eFootball PES 2021\Data)
Backup your own dt18_all first.